It was really nice!

The kids in the two classrooms said their movie was ‘amazing’, ‘awesome’, ‘terrific’, etc, etc. This was all in front of their parents.

I was really happy with the number of parents who showed. In one of the classrooms, there were like 10! I got surveys from each and every one. What I forgot to do was to ask for their email addresses, so I can keep sending them future videos. But that time will come. I’ll remember next time.

My first partner teacher was so amazing. She was the one who’d written a note to the parents and gotten so many of them to come. Then she gave me a little present at the end 🙂

And I had presents, too, for the kids. The Walt Disney Family Museum had sent them little souvenirs – bookmarks, pencils, postcards. It was great. The only thing with the postcards is all the characters on them are exclusively white. So I am going to use the more landscape-y scenes and figure out what to do with the character postcards.

I also made certificates for the kids: 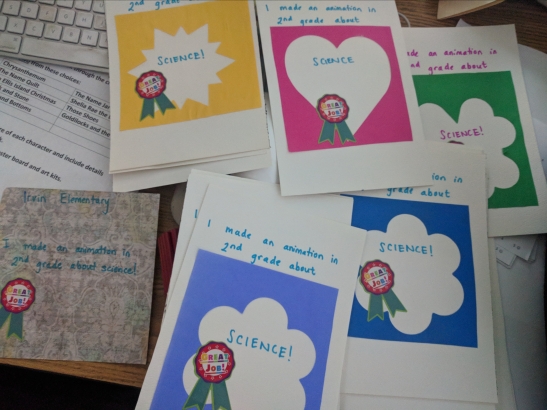 Do they look bad? The blue/yellow/pink/green shapes that were glued on – I’ve been lugging those around for about 5 or 6 years. They were from some event in the Chesapeake Bay, when I used to work there. I don’t even remember what the event was, but they had cut out all those designs so nicely, and I felt so bad about seeing a whole lot of left-overs all tossed in the trash. So I grabbed them and have finally found a good use for them.

The ‘great job’ stickers I got from Staples. They were in the clearance bins for 75 cents or something, and there were like 72 stickers in each packets. And this is the Staples attached to the mall to which I can take the bus or walk, so I felt really good and resourceful.

And I felt wonderful after the viewings – like we really had done something good and meaningful. I kind of flew into this whole project more on gut instinct, rather than as part of a carefully considered career pathway. But it’s been pretty cool. I feel really entrepreneurial. It’s a nice feeling. I feel like we’re doing something fresh and nice.

The film itself – well, I think next time I’m going to have to do something with the flipping pages. It makes me dizzy to have them fly past all the time. But other than that, I thought the caterpillar scrunching itself along was super cute. And the drawings and everything looked so good. And the kids’ animations are just lovely! And so are their voices.

Here it is: “All About Butterflies!”