We had a “Science Festival” on Union Street, and I got to share about my Animations with Kids project. In typical fashion, I started making my poster about 5 hours before the event started.

Now, I’m pretty proud of my poster, because in keeping with the environmental theme of “Animations with kids”, I did such a good job at recycling and re-using for this poster! First, I searched in my brother’s closest and found his old posterboard from like 20 years back, in which he described his invention “the reflector”, and declared he had won 2 Nobel Prizes for his inventions and written 20 books, or something. Any case. Of course, this “thing of beauty and a joy forever” must not be destroyed, so I instead got some construction paper that has been lying unused in our personal “school store” for about 15 years, and tacked it up all over the poster, safely hiding “the reflector” and giving me a blank slate for my own poster material.

Next, I grabbed some pins that I’d bought like 13 years ago, and used those attach the construction paper to the poster. I ended up with quite a dangerous contraption, in that all the pins were poking out at odd and dangerous angles out from the back of the poster. Since I knew a lot of kids would be at this festival (plus there were the possible recriminations to my own hands and body), I re-worked the pins so that they were directed – as much as possible – straight down into the cardboard part of the posterboard. So many of the pointy tips were ensconced were they could do no harm, and otherwise they were at least tilted down.

And then I found some colored scotch tape – surely 10 years old – that my Dad had lying around; and more construction paper from bygone days; and I went to the library down the street were I was able to print out pictures in color for 75 cents per page, with 3-4 pictures crammed into a page, and put together my poster.

Now, when I had first read the instructions about the Science Festival, I had just skimmed them to get the main points. Or did I even skim? Any case, my impression from my “skimming” had been that I needed to make a poster. Well, with about 3 or 4 hours to go, I decided I would be wise and read the entire instructions more carefully, and that was when I discovered I was actually supposed to provide an activity for the kids to do — and I was supposed to prepare this for about 200 kids!

And this is where my reuse and recycle philosophy kicked into high gear. I had a packet of cute little cut-outs that I’ve been hauling around for about 6 years ago, ever since I was at an environmental literacy event where I used to work in Maryland. I don’t even remember what event it was, but I thinking I was helping out at it, and they were doing some sort of activity that required lots of things like this: 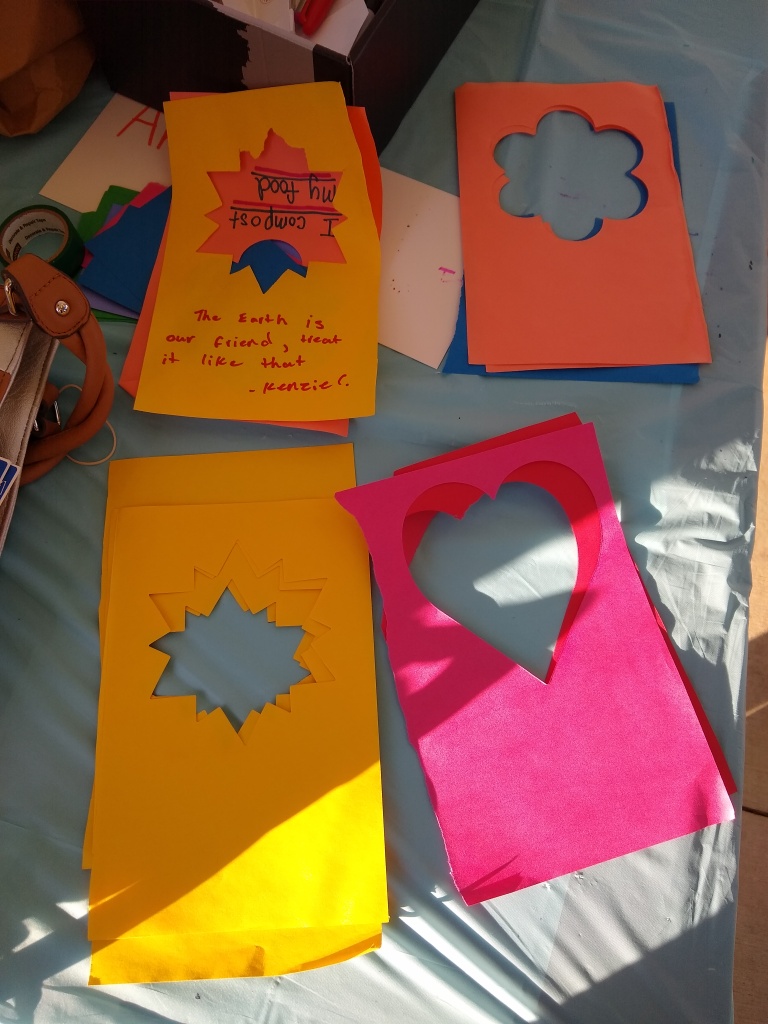 They’re all beautifully cut, and the construction paper is in pretty colors and really high-quality. All the left-overs (there’s like 300) were going to be thrown-away that day, so I rescued them, and have used them twice since: once to make certificates for the “All about butterflies” viewing party. And now I decided they would hold me in good stead for the event I had a booth at in 3 hours. I decided I would let kids that came to my booth write “messages” about the environment on these, and I told them I’d then make an animation out of their messages (hasn’t happened yet).

So I packed the pretty cut-outs, sharpies I found lying around my dad’s house, and some other essentials into a shoebox, stacked it neatly over my folded posterboard with the pins, and with 20 minutes to go until 5 pm, trudged down Union Street to the Rotary Square where, alas – I ought to have known – my booth was one of the least popular for the next two hours. Oh, well.