I’ve been teaching animation basics to the three classes at McAllister Elementary. I’m able to walk to the school – 30 minutes, each way, it’s really nice. There’s an ice cream shop on the way. And a new shop that sells baked goods and chips and sandwiches and stuff.

When the last class came in the library and saw me, they all squealed, and half of them ran up to me and gave me a hug. They all tried to jostle for the best position, or waited for their own turn to say, “she’s mine!”, or called out, “group hug, group hug.” Goodness. I’m rarely that popular.

We did our lesson. Because this was my third day in a row teaching the same thing, I was getting pretty good and had the flow down, had tweaked and improved how I was explaining things to the kids.

I demonstrated how Blender works uses a cardinal bird that I made – it’s a good choice because it’s the state bird of North Carolina. When I ask the kids if they know what the bird is, the first one always guesses “robin.” And I tell them, “no.” So the second one guesses, “a red robin.” But the third then guesses cardinal. 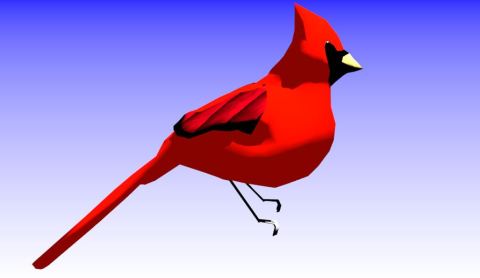 For the second half of the lesson, I have the kids come up one by one and maneuver the cardinal around themselves. They pick a spot on the movie number line, and then they either make the cardinal “go”, or rotate it, or change the size. After all 15 kids have done something, the end result is pretty cute:

the kids made a little sample animation with this #cardinal (North Carolina’s state bird). They loved that, and now they are animating their own pages. This butterfly story is about half-way done! #scicomm #sciart #blender #AnimationsWithKids pic.twitter.com/dbp5NrciyV

With my first class at McAllister, we had time for every kid to give it a try. With the second class, two boys were naughty and kept blurting out. So the librarian took them aside, and I skipped them. And for the third class – well, I ran into a problem, quickly, because two little kids were picking their noses like the WHOLE time I was teaching them. They weren’t really trying to hide it, even. And I didn’t exactly want them to touch my laptop. And I didn’t want to tell them, hey, it’s because you’re picking your nose. You don’t want to crush a child in that way.

But I remembered the class the day before when not every kid got to animate at the end. I figured I could swing things so that by the end of the class, we’d just “run out of time” before we got to the nose-pickers. Of course, I’m learning more and more that “running out of time” – as long as the kids aren’t being chaotic – is very much under my control. I can just come up with things to talk about, things to show them.

Problem was, one of the nose-pickers at least was a very sweet girl who was being very quiet and patient and kept raising her hand to get a turn at my laptop. I felt pretty bad about that.

Two kids were being loud and obnoxious. One of them was a Black boy, and he wouldn’t stop talking. The other was a white girl and she wouldn’t stop talking either, but I swear, I think because she was an innocent-looking red-head, I must have over-looked her obnoxiousness. She kept raising her hand and asking in a most sad and mournful way, “when are you going to pick me???” So towards the end, I did – and I didn’t call on the Black boy. And I regretted it because at the very end of class, she and the Black boy – who were sitting side by side – were cutting up again. And only one of them had felt the consequences of it. I felt really really bad and I’m realizing when I only have a few seconds to make these judgment calls, there must be racism that’s lurking in the background and making the decisions for me, to an extent. It’s not a good feeling to walk away with.

At the very, very end – because I still needed an excuse not to call on my nose-pickers – and I felt even worse that the obnoxious red-head got a turn when the nice and quiet nose-picker did not – I decided to show the kids an animation. I showed them “All About Butterflies” that I just finished with Irvin Elementary. This way, they could both appreciate what their neighboring second-graders had done, and get a sense for what they’re about to do. Unfortunately, the kids were pretty riled up by that point and they didn’t really watch, they just sat and made comments. I was sitting behind them, and trying to point out: look, that’s a rotation, and other pointers. I didn’t really catch what the kids were saying. I did sense that the comments were not exactly very laudatory.

Finally, the librarian marched forwards and put an end to the movie-watching and the kids’ giggles. “Boys and girls! I am so angry right now. I don’t think I’ve ever been so angry with a group of boys and girls. I cannot believe what I’m hearing. How dare you all make fun of the movie? Would you all like it if you all had worked hard on something, and then another class watched it and made fun of it?”

Immediate silence. I had also turned the movie off.

“Folks, I can handle you all talking and saying things, but what I cannot tolerate is you all making fun of other people’s work. This has given me a whole new opinion about this group of boys and girls which is going to be very, very hard for me to let go of! Who worked very hard on that butterfly movie?”

It was only then it occurred to me that indeed, the talking during the movie hadn’t been very nice to the second-graders who had made it! But I have a tendency to take things personally. So if someone makes fun of my work, my first instinct is to think: oh, yeah, it’s not really that good. Oh, what should I have done to make it better? All while trying to hide that I was mad at being made fun of.

Silence from the kids. So the librarian again: who in this room worked very hard on this movie?

The kids pointed to me.

“And who else worked hard on this movie?”

“That’s right. The second-graders at Irvin. How rude is it for you all to make fun of them. I was waiting for one of you to say: stop making fun, this isn’t nice. And not one of you did …” And it went on like that. The class’ teacher in the meantime had come in and was apprised of the situation.

The kids turned around. “How did you get in here without us noticing?” But she put her finger to her mouth.

And now both the librarian and the teacher were giving the kids a lecture, and finally the teacher said: “Rude! That’s the word for it. It’s not even disrespect, I’m just glad you used that work, ‘rude’, because that’s what it is, and that’s what we should call it.”

Whew! So the day started with me getting hugs from everyone and everyone running at me with big smiles, and it ended like that. I have another tendency that when someone is ‘rude’ to me, my default is to think it’s my fault. I must have done something to cause them to be that rude. So in a most contrary way, it was actually after the librarian started lecturing the kids that I started to feel bad – like I started to feel that I had messed up, or been foolish. So the day didn’t end all that great.

But I can say, and I have seen it again and again with the teachers I have worked with – wow, what great souls we have in our schools. Really, we don’t deserve them.

1 thought on “Groups hugs, nose-pickers, and racism – the highs and lows of Animations with Kids”