They say you should be open to feedback, and of course, of course, yes, yes. But ugh, I so hate being told that something I’ve done isn’t “polished”. I hate hate hate that.

So I met with a designer yesterday, and I showed her this latest Twitter thread I made for work. And yes, after all that work, my animations in the thread weren’t polished, weren’t cohesive. Oh dear oh dear oh dear.

So this is the thread… it’s about the crust, mantle, and core of the Earth. Yeah, I think it’s boring, too, but I tried to make it interesting.

So the problems start at the beginning: here is a still from the first animation … 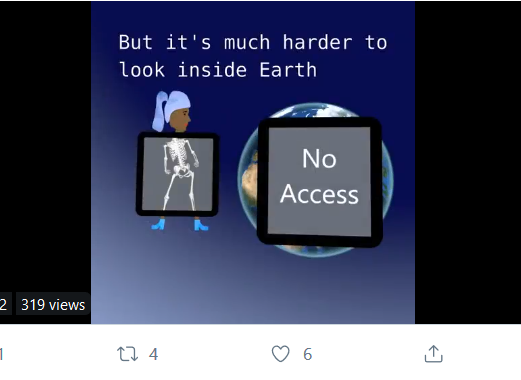 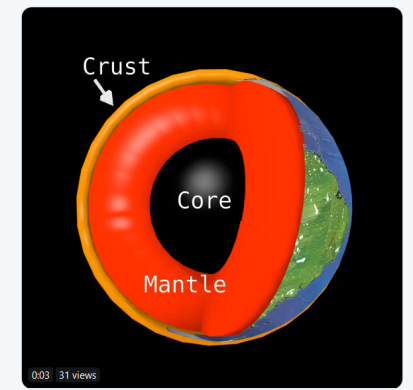 And this is all terrible because for both animations, apparently the font I used is not very readable. And because the background for one is a blue gradient and for the second it’s a basic black, it’s not coherent. And then in the first animation, the girl is 2D but the Earth next to her is 3D, and in the second animation the Earth is also 3D, and apparently this is also very disturbing!!

And the first animation also broke all the rules because that square that says “No access” should not have been bigger than the Earth it was covering. The corners should have been inside the Earth. And the black edge is too thick.

I don’t know why. I can’t see it myself that the black edge is too thick and that the corners should have been tucked inside the Earth. But apparently these are the rules you get taught in design school.

And then I was told that people are so used to very slick and polished videos these days, so it’s of utmost importance that all the work looks nice and clean. Aaaaaaaaaaah. I nearly sank into the floor.

I don’t know all these design rules, but I will try two things: I will look for a font that is more “readable” and I will make the backgrounds look the same in all my little animations.

Somehow, I am supposed to get all my animations for a thread looking coherent and put-together like all the photos on this cat-lover Instagram look.

Yes, I do see that those pictures look coherent and pulled together … but I don’t know exactly how to get there myself!!!

4 thoughts on “How to make scicomm look polished”