1. Climb the hill to the Lawrence Hall of Science. This hill is shrouded in forest, and lanes criss-cross them here and there, lined with fancy houses. It’s to the east of Berkeley. One Sunday afternoon, I followed the labyrinth of streets all the way to the top. It is pretty steep, but not too terrible. Someone told me not to do it at night, because there are just a few spots when the roads are a little isolated, and people have gotten mugged in the dark apparently. But I reached the peak, and the last little bit was not walking on the roads at all; it was on the bare, sandy slope of the hill, with powerful gasps of delicious sagebrush everywhere. And little lizards slithering eeeverywhere. And a view of Berkeley, Oakland, the bridges, the Bay, and San Francisco’s skyscrapers to the west, in glorious sunshine. At the very top of the hill, you can either go into the museum (I think it’s a museum); or you can just sit and take in the view. I went at the end of July, and there were several juicy blackberry patches along my path by the stands of forest. 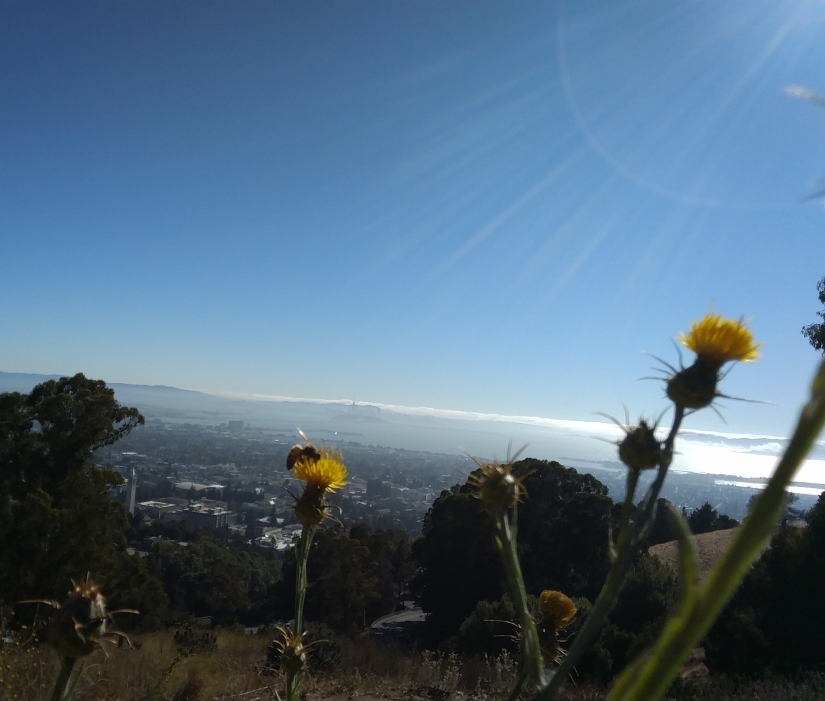 2. Bike along the Berkeley seashore. It is one of the most beautiful spots I’ve ever been, especially if you go in late afternoon, before the sun is really setting, but when it’s already angled in the sky and the light is especially golden and dreamy. If you bike along to a particular spit of land, past a marina building and the Cesar Chavez park, you find yourself suddenly swept up in a sea of yellow flowers, sitting atop long green stalks taller than I gently swaying in the wind. I think those flowers are called fennel. If you keep biking, you break out of the fennel and when it’s quite behind you and only the sea is before you, you can see Oakland, the Oakland Bridge, the tall dragon-monsters that are the electric power supplies; you can see the misty blue hills far away across the water; you can a tiny speck of skyscrapers wrapped in fog, which is San Francisco; and you see just a thread of a bridge that I think was the Golden Gate.

3. All the stationary stores. There are many and they are fine! My very favorite was Payn’s Stationary Store, which was on a cute street not far from a second-hand bookstore. I bought stickers, letter-writing paper, and something called “bokmärken” there, and if I lived in Berkeley forever, I would probably go back every month, at least. Another nice stationary store was Twig and Fig, but that one is shutting down. And a third stationary store was by the Amtrak station—on another cute street right by the Anthropologie clothing store. I browsed in that one, and I ended up buying four packs of pretty colored envelops. On the same street was another stationary store called Castle in the Air. That was also pretty nice, though it wasn’t really a stationary store, despite what Google says. I did buy some stickers there. You can get to another wonderful stationary store called Newsbeat if you keep walking to the Amtrak station, wait for one of the frequent trains, and take the hour trip to Davis, California. It’s definitely worth doing at least once. One final stationary/book store to mention is Half-price books. The prices really are great! I bought 2 sets of beautiful notecards, and they were like $4 and $5. And there were tons to choose from. Half-price books is right next to the BART train station—so in downtown Berkeley near the university.